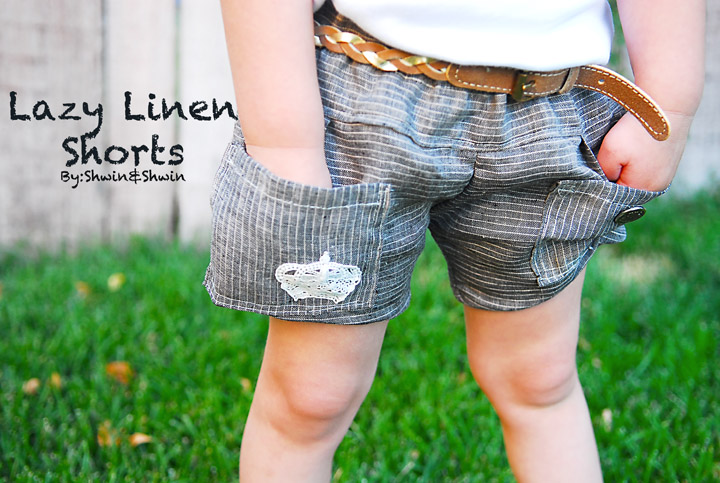 So summer is well underway (yes it is July) and Abbey was in desperate need of shorts. So I decided to whip up a few pairs. Literally whip some up, less than an hour and in whatever scraps I had laying around. I kind of made up my own little “pattern” for these ones because I loved the linen and really wanted to use it but all I had were some large scraps. What’s a girl to do? Make it work. Then I kind of liked the drop waist huge waistband look, so I may make a few more. Anyway these are styled after basically a pair of boxers… only linen and pockets make them a little “fancier” right? 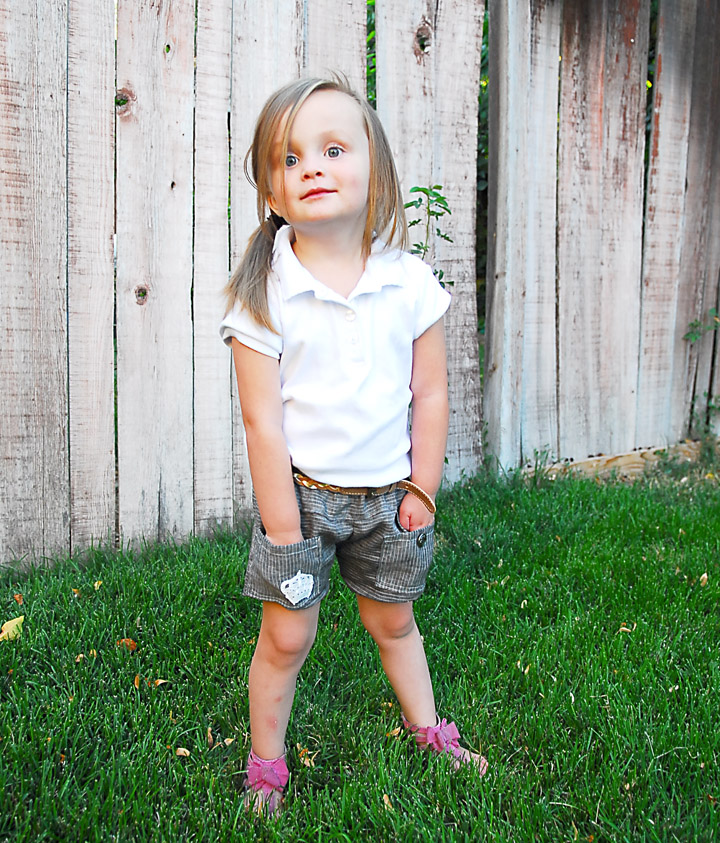 Well either way, they are easy to make, you can hardly go wrong, and they offer a different look for shorts for summer. Abbey was happy. 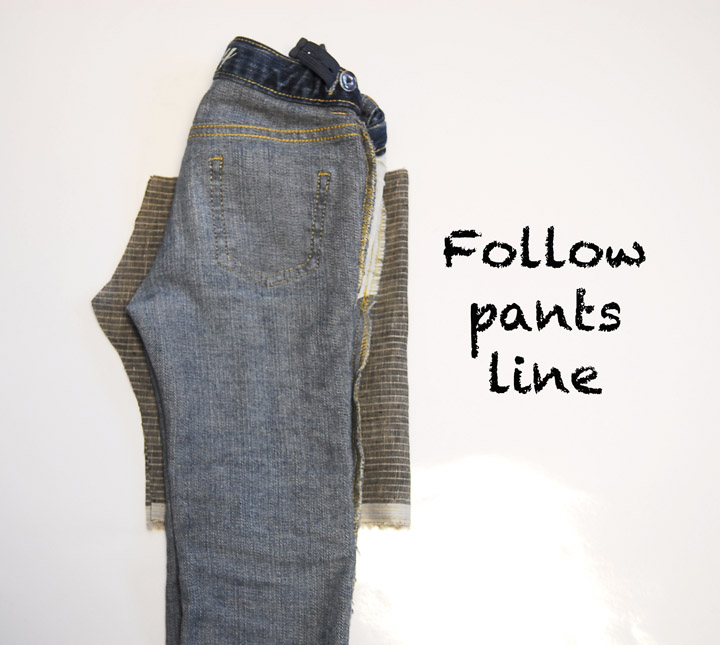 So I took a pair of pants, they were skinny jeans and I wanted the shorts to be looser so I added some space to both sides. I also cut them out on a fold so the front and back leg will be one piece. (like pajamas) Now with my scrap in order to get the “point” I had to be pretty low on the waist. Which is fine since I will just add I nice big waist band. 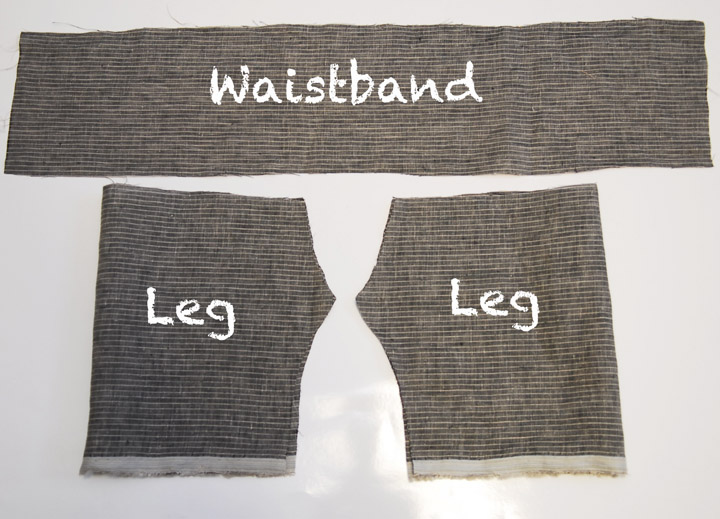 So I cut out two legs (both on the fold) and I cut my big waistband in one piece. How wide? Measure the hip and add 2 inches. Then make it tall enough to make up for what you cut off and tall enough for an elastic casing at the top. 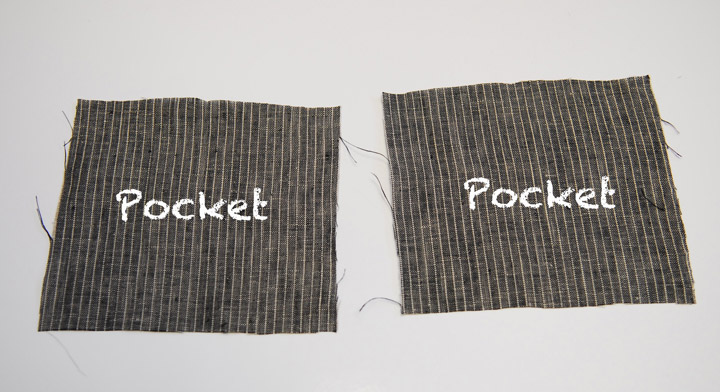 Next for the pockets I just cut out two squares. 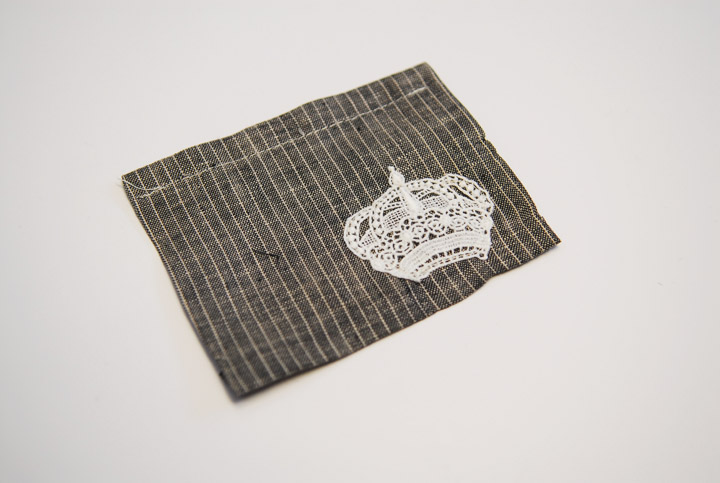 Press all the edges under and then press the top edge under twice and sew in place. I added a little applique that my husband picked up in London because I liked the little crown, and it made them a little girlier. (not a real word) 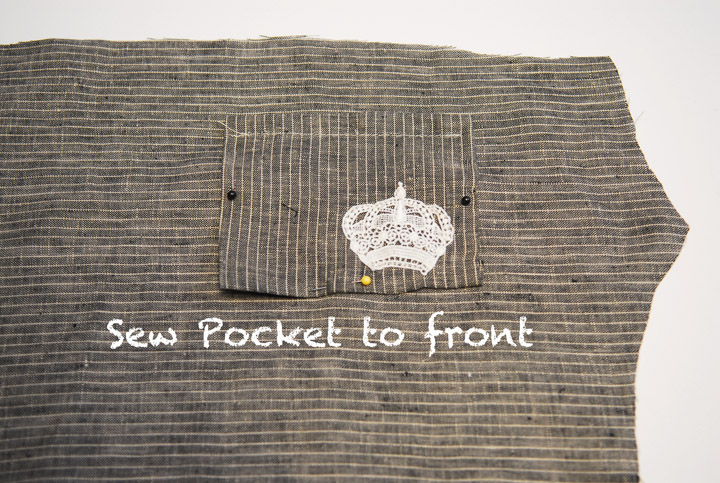 Then sew the pocket to the front of the shorts along the sides and bottom. In hindsight I would have place the pocket a little higher… but live and learn. Repeat with both legs 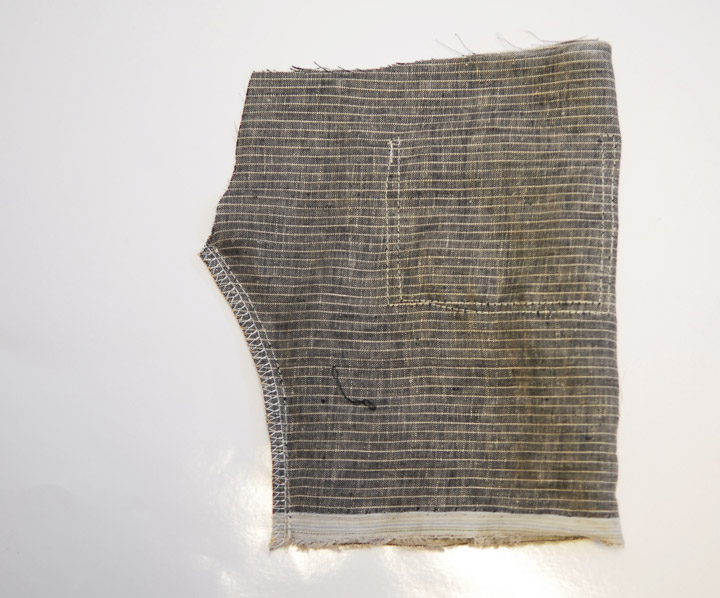 Fold the leg in half so right sides are together and sew from the crotch down the leg. Repeat with both legs. 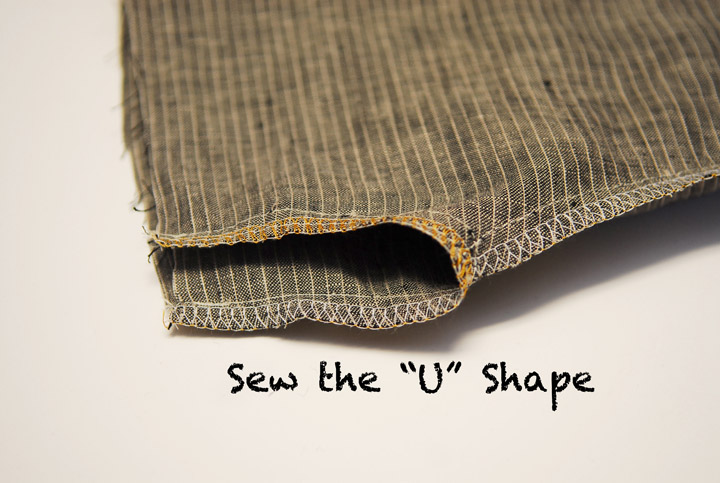 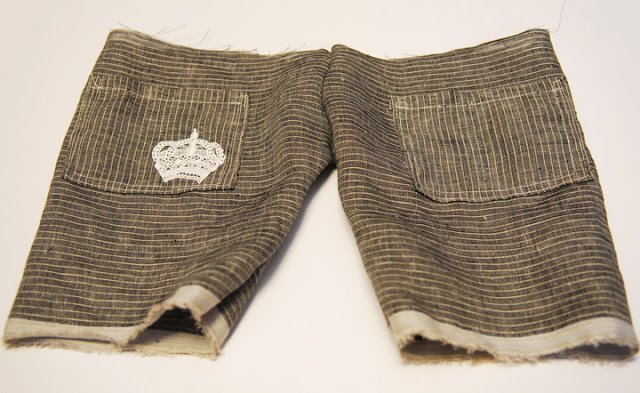 Turn the shorts right side out and you have shorts, minus the waistband. 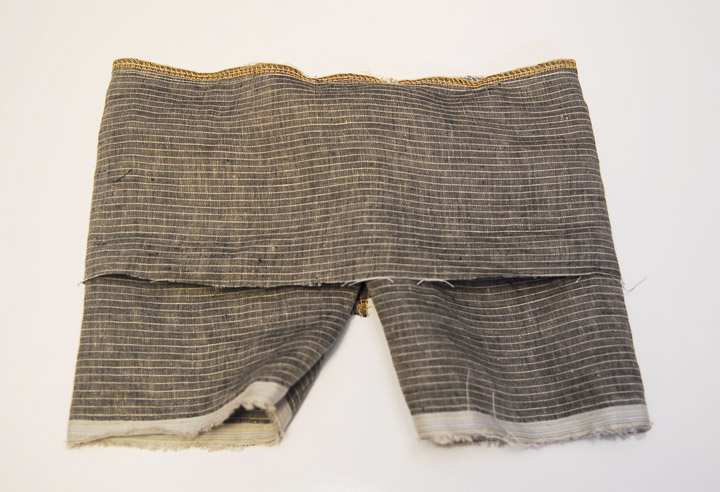 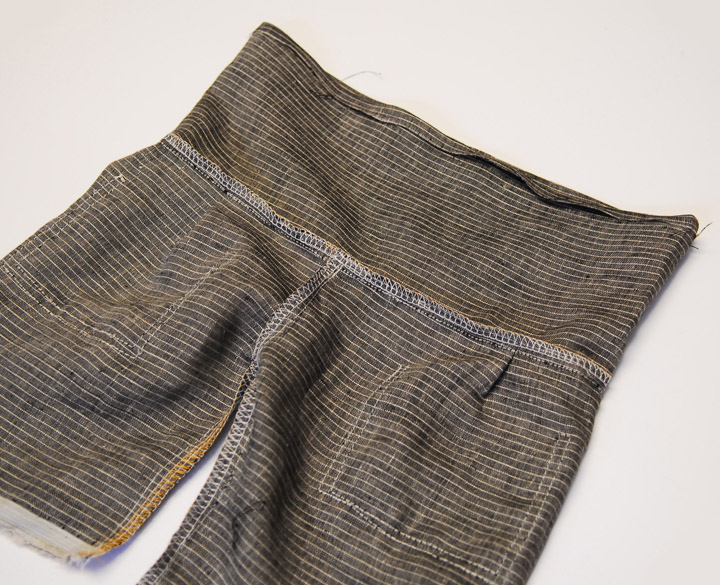 You will see I added two small pleats to the front of the shorts since my waist band was just a touch too wide. No big deal, the pleats add a little something something and like I said, you really can’t go wrong with shorts. Then press the waistband up and fold the top edge down. 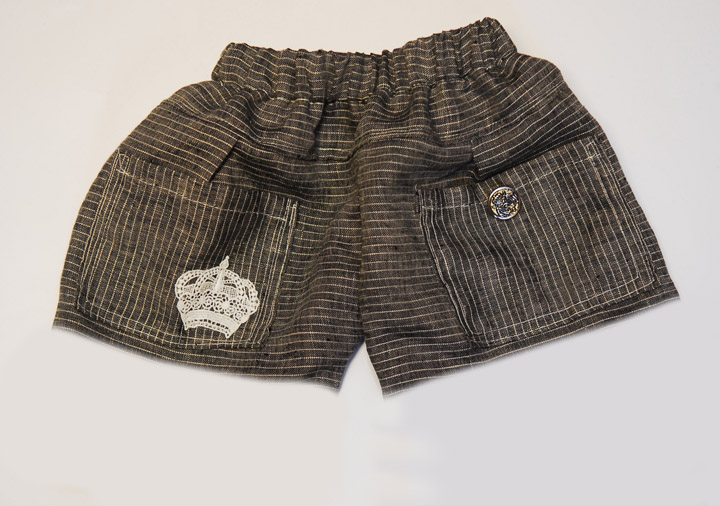 I am seriously lacking in pictures for this but fold the top edge down again and sew in place to create a casing for the elastic. Slip in the elastic and you are done. Just hem the bottom, which, for mine were hemmed more than I thought I would but the longer shorts (which I usually like) looked a little to masculine for this look. 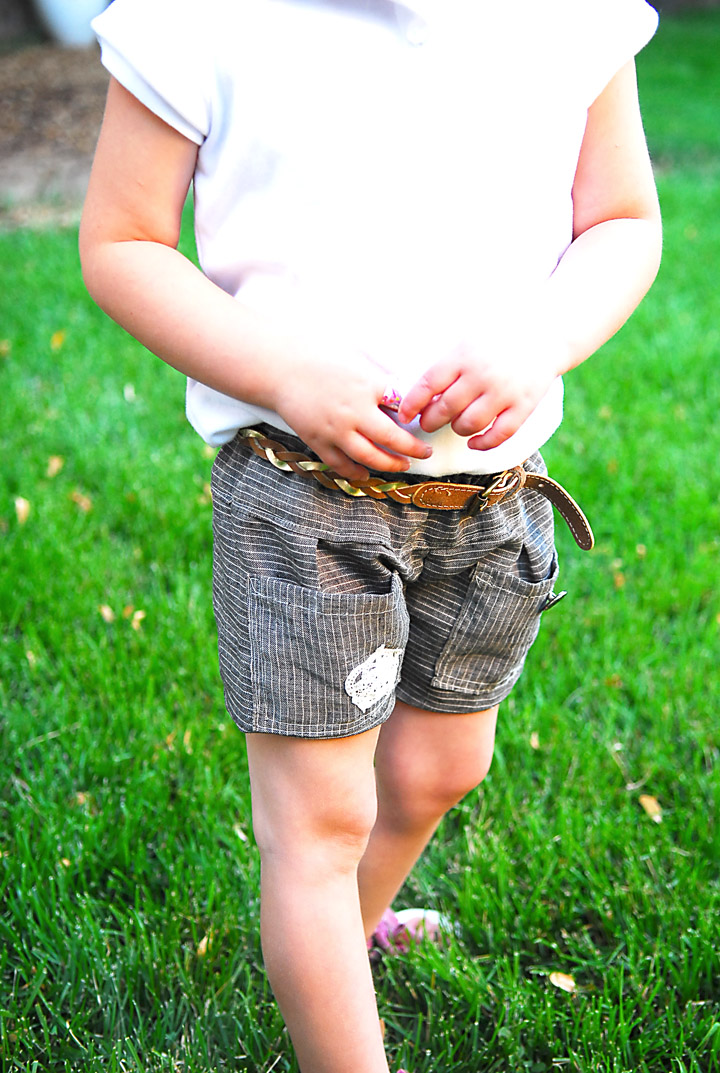 So that’s all there is to it. Lazy Linen Shorts, easy and relaxing for summer, and they take seriously no time and no major thinking to make. 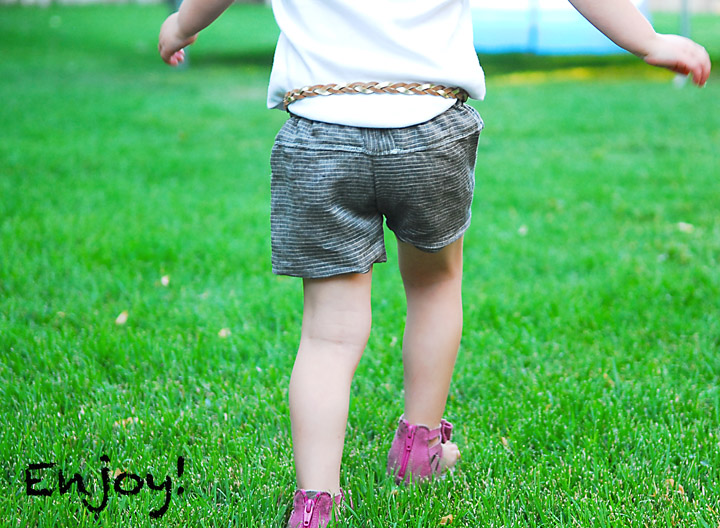 Which is how I like things these days. Simple and fast.