It’s that time again. (I know I know I skipped last week, but I didn’t get around to watching it until much later in the week and I thought it would be lame to report on it a week later) This week was another team challenge. One team challenge I get, two maybe… but three? Come on it is getting old, the drama is getting old, no one wanting to work with grumpy old Bert is getting old. Just let the designers design by themselves already. Let’s see who can really design not who can conform to others, or produce designs others tell them to do. So the team challenge this week didn’t have a team lead, what it did have was one good team and one very very bad team. If I were the judges I would have almost cut the whole team “nuts and bolts” and just continued on with the team “chaos”, since I am not sure any one on the loosing team produced anything worth while… wow that sounds harsh… let’s just break it down shall we? 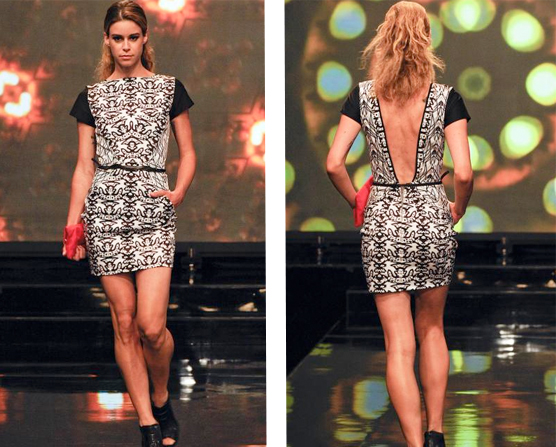 The winner this week was Anya. I really like Anya. ( I was actually surprised she was not in the top last week since I loved her look) I am happy she won even though her dress was not my favorite. I like it, I just thought the black sleeve was a little weird it made the front look kind of boring, or like a sleeveless dress with a tee underneath or something, but the back is stunning, and I give her props. (I also love the print!) 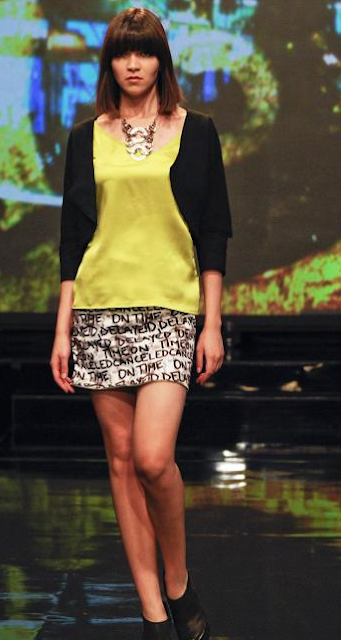 The loser this week was Becky. I have to say this is fair, there just wasn’t much design here. and everything looks boring and perhaps a little sloppy. What I think really did her in (since her teammates looks were equally as bad) was that she said everyone told her the skirt was bad but no one told her what she should design instead, the point of the show is to be a designer, not just an amazing seamstress (which she is) 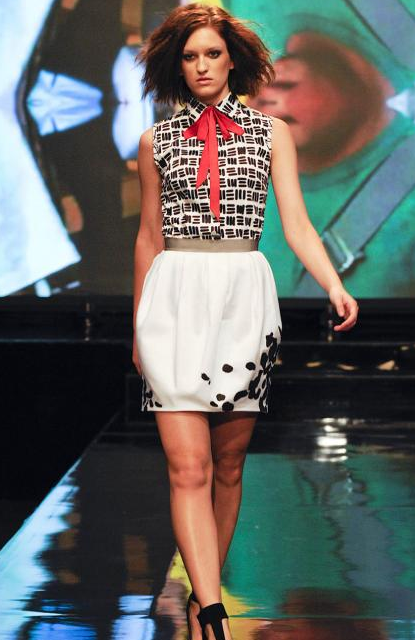 Some of my favorite looks this week were also from team chaos, the entire collection was really inspiring and I loved it all. I especially loved Anthony Ryan’s skirt, the fit is great and I love the ink blot… I may even try that. 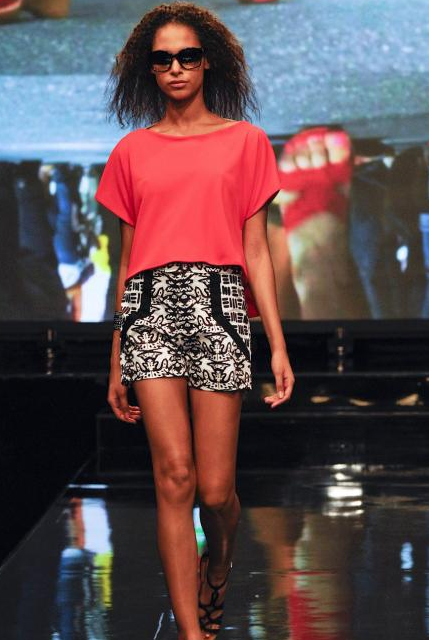 I also really loved Bryce’s look. No one gave him enough credit but those shorts are amazing I love the pop of color that top brought to the collection and although I couldn’t get a picture of the back the back was amazing! (square like the rest of the collection) 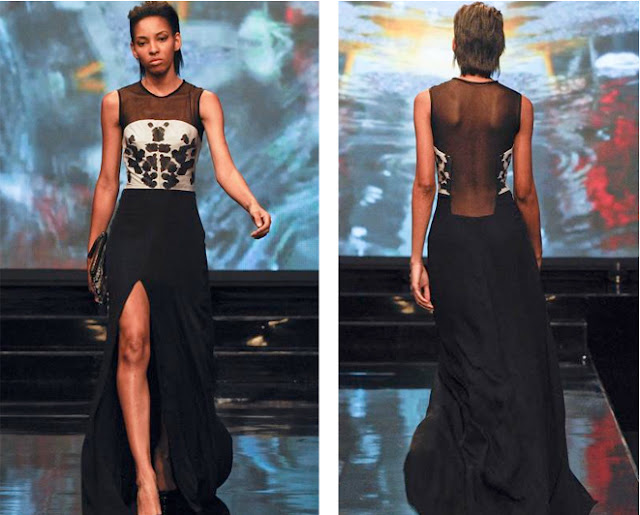 I also really liked the elegance and ease of Viktor’s gown. It was so pretty and the flow was amazing and I really like the peekaboo back. It was a great way to round out the collection. 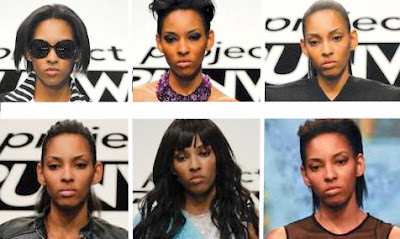 I do however think it is time for Viktor to get a new model. His model always bothers me because she always looks so put out to be on the runway. She should be “selling” the garment and she always has this “mug-shot” look on her face, that makes her look half way bored to death and half mad at the world… 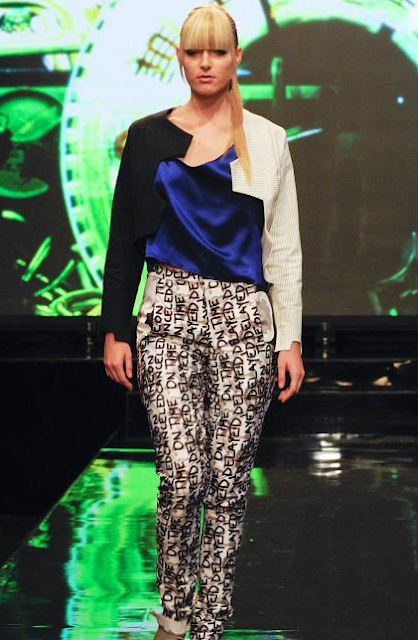 Also Mr.”drama-queen-know it all-bully” Joshua, made one of the worst things I have ever seen. The pants are horrible and the fit that he claims is impeccable makes the model look fat. (it could be due to the hideous print) The jacket had hope but I think it needed a tight fitting top underneath other wise is just gets lost. You can tell by the jacket that the whole “clock cogs” idea was his due to some vision he had in his head and that everyone else went along with it. He is lucky to have made it through. 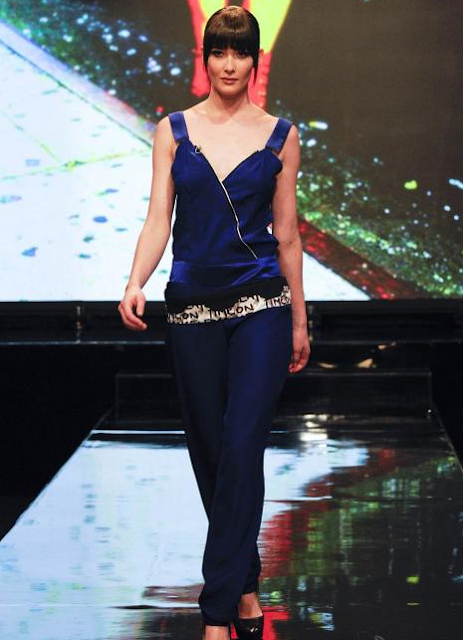 Next is Laura, who I really like but seriously if I see one more jumpsuit made on this show I may just have to stop watching.(ok not really I am addicted) but still Gretchen did several last season, and now this season they have already been done a few times (most of the time they are done badly like this one) I am just done with them trying to be passed like a new “fashion forward” idea, let’s all just move on. 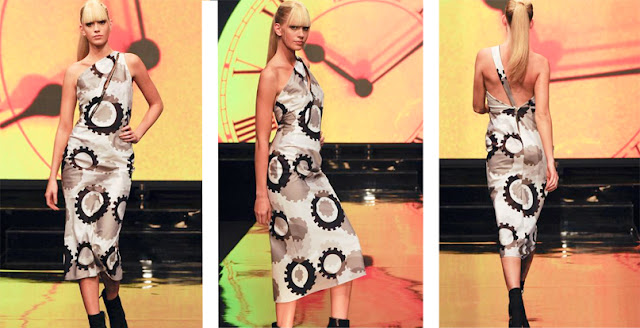 Lastly Bert, grumpy old Bert. At the beginning I loved Bert, I thought he would be great and that he had something to show the world, now I am realizing, he really doesn’t… I think there was just a lot of hope there. Michael keeps saying “the man knows how to cut a garment” um what? this dress has no shape not even princess seams as Tim pointed out and it is puckering and pulling at every curve and bend. The length is pretty bad so maybe he meant that he knows how to cut the bottom of the dress off? It’s a weird length of skirt, especially with the boot. I guess the whole thing is just weird.

So what were your thoughts? Love it Hate it? Are you still bored to death or are you finally finding the designs inspiring? Who would you pick to win it all?